The April 12th Board Meeting 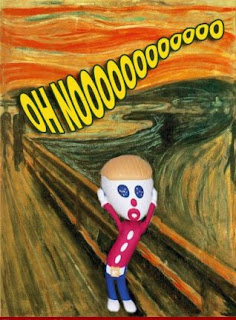 Sigh. Something has to change—I'm totally running out of variations of "The Scream". No one liked the tantrum baby - how about Mr. Bill?
Oh Nooooooo!
===

Tonight's board meeting was, in a word, disturbing. I am disturbed because this board, even though the budget has been the focus of so many discussions and news reports, almost neglected to pass the "tentative, non-binding budget" due to their inability to get past random minutia that apparently, until tonight's meeting, had gone undiscussed.

The AJC reported the other day that Zepora Roberts stated, “I am on vacation. I have thought nothing about it,” said Roberts, the board’s vice chair. “I just got back from out of the country and I have no thoughts [about the budget].”

She wasn't kidding. In fact, she actually seemed as if this meeting was the first time she had looked at the budget. She even stated, "I received my budget last evening and looked it over today."

What?!! That thing has been posted on this blog since March 26th!

Zepora continued to have one hissy fit after another for the rest of the evening covering topics such as her opinion that the budget cuts are too focused on South DeKalb or the very long debate over the agenda item discussing the committee recommendation to name the Mountain Industrial Center "The DeKalb Schools Administrative and Instructional Complex". She lamented and whined about the fact that she wanted to change the name to the The DeKalb Schools Administrative and McGregor Instructional Complex (after an African-American leader in DeKalb schools).

Zepora went on to admonish the entire board and specifically the committee working on the ethics policy, led by Dr. Speaks, in her childish, tantrum-like complaint that "no one is listening to me!" She then listed her "issues" with 6 different line items on the proposed ethics policy, ranging from her desire for board members to be somehow be allowed to be involved in relatives getting "heard" by the superintendent in the event that they get in trouble. Then she demanded that the language of accepting gifts or gratuities over $50 be changed to include "knowingly", citing the example that if someone delivers flowers to her, she doesn't want to have to ask their worth. (The board actually decided to raise the amount to $100.)

And my favorite—she wanted to continue the practice she says is current board policy, of accepting up to $100 for a speaking engagement or serving on a panel in another district or city as a representative of the DeKalb school board. Paul Womack rightly pointed out that they already get $450 per month for such expenses, however, Zepora droned on about getting paid for her "service" to others. She won that one, but I kept wondering why the rest of the board continues to entertain her in discussion at all. We've all dealt with two year olds—the best way to handle a tantrum is to ignore it.

But beyond the basic premises of these ridiculous debates was the disturbance in my gut. These people argued, fussed and fumed over such deep issues as "define a reasonable person" or taking McGregor "off the shelf" or who exactly can benefit from the summer intern program (which in my opinion is a luxury giveaway program and should be cut). They had an extended debate as to the cost of a meal nowadays relative to the ethics policy discussion, culminating in Dr. Walker mocking Mr. Womack for thinking that $50 was plenty. ("Well, back in the day when you entertained for business, you could probably get a meal for $10—I'm glad you're not entertaining me!") Meow!

Worse, after initially not passing the "tentative, non-binding budget", (containing school closures and no tax increase) Ms. Tyson pointed out in no uncertain terms that the law states that they must operate under a balanced budget and that they are required to approve one by June 30 that can be operating by July 1. Further, the law states that the board must present the tentative budget at least twice for public review before final passage. This is serious. Luckily, they heard what Tyson said and changed their votes to approve the "tentative, non-binding budget".

There is a meeting scheduled this Friday to hash over the details and hopefully remove items like the one discussed on this blog and requested to be removed from the budget cuts by Paul Womack—the demand to reduce planning time for teachers on the 7 period day to only one period.

After fumbling around with her budget, obviously unprepared and uninformed, Zepora promised that she would "have it together by Friday".

Email ThisBlogThis!Share to TwitterShare to FacebookShare to Pinterest
Labels: Board Meeting, budget cuts

Sorry to be contrary because: a) You could be right, and b) my beef isn't with your particular position.

I believe we have to let the teachers tell us what is working or what is a luxury. I haven't heard one teacher at Cross Keys characterize PRC this way (yet).

Can't we focus on changing the infrastructure and mode of operations at DCSS rather than armchair quarterback each program?

We are re-arranging the deck chairs on the Titanic. We have to consolidate and redraw. We've been in denial about this for at least two decades as far as I can divine. The chickens have come home ...

Me, personally? I hate the idea of big schools. But this is where the real money is if we're going to make it about the money. It's about the money, right? That's what it has come down to ...

We are in denial and nary a palm tree or pyramid in sight ...

What if we had 50% the number of the schools we have now but they all had small class sizes, healthy cafeterias, thriving extra-curricular options, necessary instructional programs to support all needs (ELL to Gifted) and pleasant facilities?

Renovating our current plant is only doubling down on a bad bet ...

I do not know the costs, but Atlanta City Schools is taking a stab at the "large physical plant, small school" concept:

The New Schools at Carver, which opened in August 2005, was the district’s first bold step toward transforming high schools, both structurally and academically. Carver now features four separate schools that focus on specific disciplines: Early College, School of the Arts, School of Health, Sciences & Research, and School of Technology.

One advantage is the reduction in cost of operating physical plant - if you have maybe 2500 students in one physical location, it has to cost less than 1000 in one place and 1500 in another.

I don't know, but something to chew on - gee, sounds a little bit like the "Brookhaven High School of Math, Science, Technology and Arts", doesn't it?

Very Clever! Cross Keys would be a perfect site for this kind of campus.

It is to bad DCSS didn't get DECA right. This is the kind of think that the Gate's Foundation gives lots of money for. I am still unclear what went wrong with DECA, in terms of sustainability, but I suspect that DeKalb, which probably had no credibility with the Gates folks, now has none.

Perhaps it should be a qualification of the next superintendent that the system they are coming from has a good track record with foundations like the Gate's foundation.

Isn't the Gateway to College program a Gates project? Maybe there was overlap and the DECA students can combine. I know people who are thrilled with Gateway.