“This is an EQUALITY Issue”

Since July 10, 2006 when Audria Berry was made Director of the Office of School Improvement, the number of DCSS Title 1 schools has increased slightly while federal funding (primarily for the academic improvement of students in schools classified as Title 1) has increased 220%. Note that federal funding from 2005 to 2010 has been close to half a billion dollars. When 2011 RTTT money is added in, that half billion figure will be a reality. Although the DCSS administration from Lewis to Tyson has treated these federal dollars as “free” money, EVERY citizen in DeKalb County who has paid federal taxes in the last 6 years has seen this money deducted from his/her paycheck. Have these federal dollars benefited the students they were/are intended to benefit? 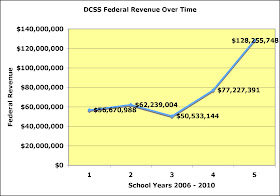 DCSS is STILL divided into a dual system when it comes to student achievement. Look at DCSS’s 2011 Georgia High School Graduation Test scores. The Office of School Improvement has had close to a half billion dollars to spend in the last 5 years from when these students in our Title 1 high schools were in elementary school, and they have failed to move them forward in relation to their peers. 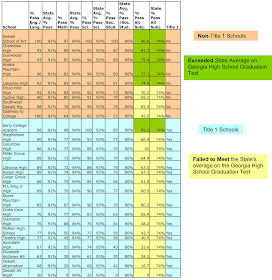 $500,000,000 spent for INCREASED student achievement in Title 1 schools that has in reality resulted in DECREASED student achievement is not acceptable. BOE members need to look at the schools they serve and ask if they are comfortable supporting the present DCSS administration personnel who have overseen the expenditure of half a billion dollars for Title 1 schools while presiding over a decline in student achievement. The DCSS administration needs to understand that taxpayers all over DeKalb are interested in the achievement of EVERY student in EVERY school in DeKalb. The DCSS administration and BOE must take responsibility for spending tax money earmarked for leveling the playing field for our lowest income students in an efficacious manner. A Return on Investment needs to happen for ALL students.

See below for a list of the schools that the DCSS BOE members represent. Please email your BOE member and ask him/her if he/she is satisfied with the $500,000,000 spent by the Office of School Improvement.

This blog is moderated. Please submit your comment and we will review it as soon as possible. Offensive comments will be removed. Thank you for participating in our community blog.