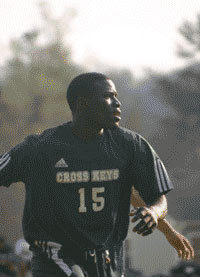 This is a story is about Abu Bangura, a 2009 graduate of Cross Keys HS who was born in Sierra Leone, survived years in a refugee camp to escape war in his home country and immigrated to the U.S. in 2003. As 2008 Team Defensive MVP and 2009 Co-Captain and Team MVP, Abu is an amazing soccer player who earned a 4 year scholarship to Piedmont College from his hard work in the classroom and on the athletic field.

Abu became a citizen of the United States in June, 2009!

We admire your courage and confidence Abu!

=================
"Against All Odds" is a new topic that we hope to post as often as possible. We want to focus on students in DeKalb schools who have success stories to share - against all odds - stories to inspire and encourage all others. Send us your story!
Posted by Cerebration at 6:11 PM

Is this the young man that Kim was talking about? If so, is the jersey hanging in the Waffle House?

It is. Dedication event is tentatively scheduled for Sept 19, 2:00pm. I'll circulate a full event description/details as soon. The corporate folks at Waffle House are excited and honored to house this tribute. It will be very prominently displayed and visible from Peachtree Road at Dresden Drive - even from passing cars!

It is going to be that day just waiting to nail down the specifics of the festivities. It will be a fun event but I can't say much more yet without spoiling some neat surprises. Open to the public so pencil us in! Don't bring your daughters - apparently they melt in Abu's presence. :)

Thanks, Cerebration, for posting this. I think it is a great venue for highlighting DeKalb's best kids. Readers should send in profiles (with parental consent for minors!) to keep the positive vibes flowing.

Abu is a great example of kind of kids that attend Cross Keys in relative obscurity. I am working on efforts to bring to light the amazing kids at CKHS because a) they deserve all the recognition, and b) it will help bring in more support for this most deserving school.

Depending on the year, there are between 40-70 countries represented on average by the enrollment. CKHS is an incredible asset to our DeKalb community and we should be taking advantage of the power of its diversity.

Can't afford studies abroad for your kid? Send them to CKHS! I'm not kidding. They will know more about world culture, language, cuisine, customs, and perspectives than you could ever pay someone to teach them.

The kids here are some of the most well-rounded and world-wise you'll ever expose your kids to - this is an under valued part of CKHS' story. There may be a shortage of $$$ in our zone but there's no shortage of culture.

There are unique experiences available at this HS like no where else in DeKalb and beyond. Stay tuned for more about the planned dedication of Abu's jersey ...

This is going to be fun, fun, fun! I received verbal confirmation from Waffle House Corp that the community can host a dedication ceremony for Abu's jersy. If you're curious to meet some of these amazing students and faculty, plan on dropping by at 2:00pm (or earlier for lunch!) on Sept 19 at:

We'll be celebrating this young man's accomplishments, our immigrant families, our school, our community, and our great country!

As one of Abu's teachers, I couldn't be more excited about this. We miss his sense of humor and wonderful attitude. He graduated with a great class and Cross Keys is proud to have introduced these graduates to the world!

For those interested in supporting Cross Keys HS students, here is the formal press release for the dedication event and a link to the soccer coaches' wishlist:

2009 Graduate of Cross Keys High School to be Honored

Here's your last reminder - we're on for tmow rain or shine! See:

On behalf of our school and young people - Thanks for all the support!

Kim... It is still at the Waffle House on Peachtree right? Can't wait to see you and watch that jersey get put on the wall.

For those who couldn't make the event or are simply interested, Kaleidoscope has published their coverage of this event along with a very nice video. Check it out in the middle of the page at:

Great article, Kim! I like all the embellishments that they put on your name... ;-)

The Kaleidoscope is a fantastic, fairly new production of DCSS - one of the best communication initiatives I've seen from the school system. We have a link on the home page of the blog - you can visit their site anytime and sign up to receive their email newsletters.