The Mountain and The Teaspoon 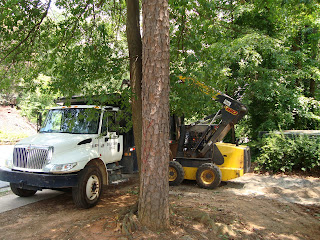 It is easier to criticize than to contribute. This truism is one that plagues leaders in public, private, profit, and not-for-profit enterprise. While criticism is often earned, it is also too often simply a past time for the malcontent and the lazy. A kind act or word can be a bright light in the otherwise dark night of ubiquitous cynicism.

It is in that hopeful spirit that I want to compliment DCSS for starting to take action in a relatively swift fashion regarding the vagrancy and mis-use of Cross Keys HS property (see, DKPD, DeKalb Sanitation Clean Up Vagrancy near Cross Keys HS, Buford Hwy (UPDATED 6/10 Photos). Though this has been a problem area for many years, I believe the renewed community attention (and the support of this blog's readers) has finally inspired action.

Last week, I received a call from a watchful neighbor who spotted DCSS Ope 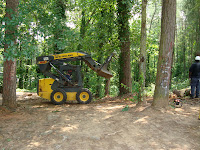 rations vehicles and crew working by the athletic field at the school. I dropped by to chat with the crew and learned that they have been given the order to clear the under brush and small trees out of the overgrown area adjacent to the athletic field.

While the going is slow and it may be simply a small step towards a more sustainable solution, I was greatly relieved and encouraged to see DCSS responding with direct, effective action in this case. This simple approach will decrease the likelihood of ongoing mis-use of the school grounds.

There is much to do to restore Cross Keys HS damaged reputation and the first step is winning over the surrounding communities and thereby the enrollment of their kids. A public relations effort of that size is indeed a mountain that must be moved. This is a welcome spoonful towards moving this mountain.

DCSS' critics (including this one) will certainly continue to monitor ongoing efforts at Cross Keys. For this week, let the criticism fade to background noise and let's enjoy this moment of progress.
Posted by Kim Gokce at 6:30 PM

So glad to hear that some work is being done out at Cross Keys. Don McChesney and Pat Pope must be hearing the rallying cry - - I hope their commitment continues - and endures.

Did you read the article in today's paper stating that college enrollments by Hispanics has mushroomed? We can contribute to their success with strong support of the Cross Keys community.

I am happy but not suprised.

Just a quick update, the operations team has pretty much completed a first pass at cutting a swath through the land in question at Cross Keys HS. I'll keep monitoring and will post updates. I'll put together a before and after piece at some point for the community's reference.

We'll also need to stay tuned for how the land is managed on an ongoing basis - clearing the underbrush is great but there must be some active use of the property for it to remain clear of the current mis-use.

Yep, if DCSS staff aren't going back and monitoring the property, the bad stuff will be right back. Good luck with making sure the DCSS grounds staff comes back often and keeps the underbrush out of there. The DCSS Grounds Crew is not one of the better divisions of the school system. Talk about underperforming.

Now Anonymous we know how hard these crews work. (just kidding with you) I want one of these jobs when I retire.