Below is a very touching article from the DeKalb Neighbor newspaper. I think it highlights once again, the struggles so many immigrant students face as well as many of our naturalized students. If any of you have the inclination to serve as a "mother mentor" I think you would find it very fulfilling. You could save a child's life.
===
By Gloria Love
glove@neighbornewspapers.com 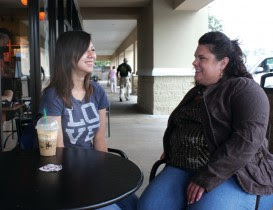 Chamblee resident Thuy Le has enrolled in classes at Georgia Tech, in part because of aid from the Tucker-based non-profit Students Without Mothers.

The organization provides $4,000 scholarships for four years to students whose mothers have died or are absent through other circumstances. The group also pairs students with mentors who offer advice on any number of issues.

“We’re paired up with a life coach we can talk to about anything, like boys or school,” said Thuy.

“It’s actually pretty helpful. I feel like I’m not alone as much anymore,” she added.

Thuy, 17, graduated from Cross Keys High School in May.

Her family moved from Vietnam to Chamblee when she was 1 or 2, she said. Shortly after, her mother moved to California and took Thuy’s younger sister but left her and brother Thanh behind.

When Thuy’s father, who had a history of unstable behavior, left at the end of her junior year, Thuy and her brother used proceeds from after-school jobs to rent a room with friends. Thuy and her brother are now living separately, and she is living with a family friend, Tuyet Le.

“She’s someone my dad knew and she was nice enough to take me,” Thuy said.

Thuy worked through school at a nail salon, as a tutor and, more recently, as a paid intern at Emory University. For the last four years, she said her dream has been to attend Georgia Tech.

“I chose Georgia Tech back in the ninth grade. It just really appealed to me because of its math program,” she said.

Thuy said she plans to use her biomedical engineering degree to design and sell prosthetics.

“I really wanted to do prosthetics. It’s math and science put together, and prosthetics help people who feel like maybe they’re not normal or how they used to be. Prosthetics help them get that back,” she said.

Students Without Mothers is run by a nine-member volunteer board. Founded in 2004, it has offered aid to more than 40 students, said founding board member and volunteer Adrienne Hollis.

The group receives its funding through private donations, corporate sponsorships and an annual fund-raiser.

Ms. Hollis, a Monroe resident, said at the time friend Mary Torrence founded the organization, “I was a single parent… it had never occurred to me what would happen to my child if something happened to me.

“There is not an organization I’ve volunteered with that has been as fulfilling. The most difficult thing every year is turning away students just because we don’t have the money,” she added.

Why not mail them a check?
Posted by Cerebration at 8:24 AM

Email ThisBlogThis!Share to TwitterShare to FacebookShare to Pinterest
Labels: mentoring

Thanks for sharing this, Cere. Thuy was one of the first Cross Keys students I met when I begin my efforts there. She was at a public meeting about the SPLOST III project for CK and along with some of her peers asked very insightful and direct questions. I asked a small group of faculty members after the meeting about who the girl with the sharp questions was and they instantly knew I was talking about Thuy.

She was a leader in CK's service club, Rotary sponsored Interact, - a team that placed 1st this year competing against powerhouse schools like Milton, Chamblee, and North Atlanta. She was a leader on CK' student council among her many other extracurricular activities and in her spare time placed 2nd in the County Science Fair in category.

The Cross Keys Foundation fielded a team at the School Council's annual fundraiser, Battle of the Classes, a series of team competitions in events designed to frustrate and humiliate participants. When we showed up at CK without a clue of what to do, Thuy greeted us as a event facilitator along with her peer Denis Jaimes (Overall individual Grand Prize winner DeKalb County Science Fair) and smoothed our way into and through the preparations and the events.

You will never meet a more humble and hardworking student. And readers of this blog must tire of my saying it but ... she and her experience are another example of the quality of the young people and the dedicated faculty at Cross Keys.

I was truly privileged to watch just a bit of her senior year in 2010 and will never forget her and her inspiring story.

Wow... Anonymous is speechless! Thanks for the great "rest of the story" Kim.

What a wonderful, heartwarming story! And what a blessing for Thuy, who sounds like she has a great head on her shoulders with TONS of potential!!