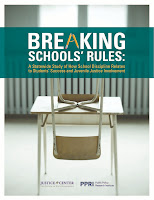 The Council of State Governments Justice Center has just released a report called Breaking Schools' Rules which "describes the results of an extraordinary analysis of millions of school and juvenile justice records in Texas. It was conducted to improve policymakers’ understanding of who is suspended and expelled from public secondary schools, and the impact of those removals on students’ academic performance and juvenile justice system involvement."

"Like other states, school suspensions—and, to a lesser degree, expulsions—have become relatively common in Texas. For this reason and because Texas has the second largest public school system in the nation (where nonwhite children make up nearly two-thirds of the student population), this study’s findings have significance for—and relevance to—states across the country."

Key findings in the report include the following:

1. Nearly six in ten public school students studied were suspended or expelled at least once between their seventh- and twelfth-grade school years.

2. African-American students and those with particular educational disabilities were disproportionately likely to be removed from the classroom for disciplinary reasons.

3. Students who were suspended and/or expelled, particularly those who were repeatedly disciplined, were more likely to be held back a grade or to drop out than were students not involved in the disciplinary system.

4. When a student was suspended or expelled, his or her likelihood of being involved in the juvenile justice system the subsequent year increased significantly.

5. Suspension and expulsion rates among schools—even those schools with similar student compositions and campus characteristics—varied significantly.

The findings summarized above demonstrate why it is important for policymakers everywhere to examine the school disciplinary systems in their jurisdictions. This will not be without challenges for many states and will likely include significant investments in state-of-the-art information systems. Having quality data available is only the first step. To produce the unprecedented level of analyses found in this report, policymakers will need to follow the example set by Texas leaders across the political spectrum that showed courage and commitment by digging deep into an issue that has received relatively little public scrutiny.

An important take-away from this study is that individual schools within a state, working with the same resources and within the same statutory framework, have the power to affect their school disciplinary rates. In communities across the country, educators, juvenile justice system officials, service providers, students and parents, and advocates are also taking steps to implement innovative approaches that yield different disciplinary results. Nationally, a growing number of advocacy organizations and membership associations are drawing increased attention for their efforts to come up with more effective and fair approaches to school discipline. And a growing body of research is supporting and expanding upon these efforts. An essential next step is to convene experts, policymakers and advocates from education, juvenile justice, health, and child welfare systems to build on the important work of these stakeholders and to begin developing a consensus around approaches that will improve outcomes for students and teachers.

Why is this important to us? Because of all of the countries in the world, the United States has more people per capita in prison. Of the states, Georgia has one of the highest levels per capita behind bars at 1,021 per 100,000. In fact, according to the New York Times, "the United States has less than 5 percent of the world's population. But it has almost a quarter of the world's prisoners". We need to focus on issues of poverty and ignorance in order to stop this downward spiral. The issue is the worst for African-American males.

The government is building prisons based on third grade reading test scores. They can conclude whether or not a child will go to prison and some point if their literacy score is low. Recent national data from a study of beginning kindergartners show conclusively that African American males start school already behind other groups of children with respect to emergent reading and mathematical skills (ECLS-K, 1998). Thus, problems in elementary school may have roots in the preschool years. Most African American Children are behind on reading but excel in other subjects (Jencks & Phillips, 1998). The gaps don't stop in elementary school, but are evident in middle and high school if never caught up by the early elementary years (Gordon 2-4)

Sadly, the U.S. is far more committed to prisons than to schools. According to this report from Fox News, state governments spend nearly four times more per capita on imprisoning people than on education.

Prison is not the answer in so many cases. Education is the key to freedom and enlightenment. We must do whatever it takes to directly reach each and every student, ensuring them the ability to take care of themselves and their families if we are to enjoy a safe, productive society in the future.

===
http://knowledgecenter.csg.org/drupal/content/breaking-schools-rules-statewide-study
Posted by Cerebration at 9:03 AM

Tell my why money was wasted on this study? I did not need a study that shows that a child with no respect for school rules or education in general will have no respect for society rules and end up in prison. If you want an improvement, then parents must teach their children respect. I'll bet (without wasteful spending on another study) that someone that learns respect at home, does better in school and in most cases manges to stay out of prison.

I don't think it's just a parent problem. I believe it's a good mix of parents not parenting and schools not teaching. I have come across too many kids that are behavior problems because they are behind and know that they can't do the work. These kids get the help that they need (usually in reading) and improve their skills and have a whole new world put in front of them, with a new attitude.

Also, we need TRUE alternative schools where students can go and remain for an extended period of time and receive the academic and psychological assistance they need to be able to function in school. Furthermore, the traditional school setting is not suitable for everyone. Yet, we continuously take them out for a semester and then throw them right back into the same environment with the same issues that caused them to be suspended.

Your point is very often stated bills12man, however, if we really want to stop this cycle of poverty and prison, we cannot rely on the parents of these at-risk students. We will have to come to the point where we are all willing to roll up our sleeves a little and "be the change". The Sagamore ES parents are terrific examples of such an effort. They found the students in their school who were struggling and failing to make AYP and they jumped in as a small army of one on one tutors and mentors -- and improved these kids abilities, test scores and self-esteem!

Not only is it the "right" thing to do for these students, it's truly the only way to stop the downward spiral and save this great American society.

Also, a larger percentage of students than we realize are really struggling with chemical imbalances and medication issues. They really need the medicines to help them focus and control their behaviors (i.e. ADD, depression,etc.) yet these medicines make so many of them feel so badly (i.e. extreme drowsiness and disconnection) Also, as teacher pointed out so many of these kids in the older grades are so far behind academically and their life experiences are so incompatible with the grade expectations (many are leading adult lives outside of school) that they can only begin to truly recover in a alternative, long term, smaller setting. Also, this would keep them from continuing to return time and again and exert negative influences and bad energy that especially affects students who are not that strong but would be able to do so much better in the absence of such negative energy.

The U.S. government and the state of California have together spent around $4 billion since 1978 on the state's death row, yet only 13 prisoners have been executed, for an average of $300 million per execution, a new study reveals. The cost includes keeping 714 inmates on death row as well as steering them through the tangled judicial process all the way to the death chamber. "We really want voters to wake up and realize this is a horrible waste of money," says one of the study's authors, a professor at Loyola law school.