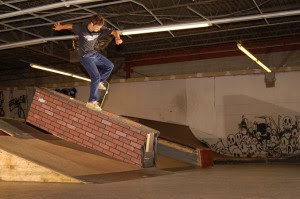 How many of you can say you have seen your life flash before your eyes? Hopefully, not many.

In the wee hours of the morning on Sunday, November 27th, Ambush Boarding Co. friend and team rider, Josh Butler, and a group of friends were hanging out on the front porch of a buddy’s apartment. By all accounts, it was a normal house party. Nothing seemed out of the ordinary. But, while everyone at the party was chilling out and having a good time, three criminals were casing the joint. They passed by a few times and looked in the direction of the apartment. At one point, one of the villains asked for marijuana.

Josh and crew were disengaged and uninterested in the three thugs. They were doing what normal people do at parties: having fun. Josh had no idea that his life would permanently change in a matter of seconds. In an instant the nonchalant passers by became armed robbers. Two of the men pointed guns and demanded money and cell phones. One of the guns was aimed directly at Josh’s face. Instinctually Josh pushed the gun towards the ground. In the process the criminal fired the gun into Josh’s abdomen. The bullet tore through his stomach before exiting his colon.

Andrew Edge, Trey “Catnip” Abad, Zach Newman, and Ben Hayes picked up their wounded friend and stabalized him until the ambulance arrived. Andrew put pressure on the bullet hole in an effort to supress the bleeding while Catnip, Zach, and Ben comforted Josh and motivated him to fight.

Josh was rushed into surgery at Grady Hospital. The surgeons repaired the gunshot wound and immediately began work on Josh’s bladder, stomach, and intestines. During surgery, Catnip assumed the unimagineably diffcult responsibility of calling Josh’s mom.

The ER waiting room swelled with friend’s, family, and those whose lives Josh has touched. The support, along with Josh’s strength and mental toughness, helped him pull through the surgery. Josh is going to survive, but the next six months are going to be a challenge. 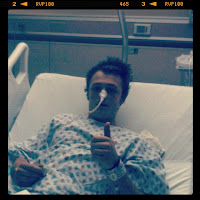 The road to recovery starts now. Although Josh is still hospitalized, he is improving rapidly. He is eating solid food and walking unassisted for several yards at a time. Josh is learning to manage the pain and live with with the knowledge that he will be unable to skate for at least six months. The healing process will take a long time, but with your help the comforting can begin immediately.

Josh’s medical bills are already astronomical. On top of that, add six months of nurses visits, physical therapy, another scheduled surgery, antibiotics, pain meds, and on and on. It’s a staggering sum that could financially destroy Josh and his family. So we are appealing to you for help. Please donate any and all you can to help Josh recover from this unconscionable act of violence.

Those of you who know Josh understand that he is one of the most fun-loving, inspirational, and tough guys around. He can disarm you with his kindness and small town charm. He can motivate you through his actions both on and off a skateboard. And, most of all, he can befriend you with his loyalty. It is tough to see something as senseless as this happen to a person of his character. Show Josh that violence and brutality will never win and that caring and generosity will help overcome all odds. Donate to the Josh Butler Medical Fund.

The Josh Butler Medical Fund has been set up through SunTrust Bank. To donate online by credit card, please click here.

To donate by cash or check, please visit any Atlanta area SunTrust Bank and ask to contribute to the Josh Butler Medical Fund.

Because of the serious nature of this post and the fact that this kid is fighting for his life, the blog was put on moderation. Comments will only be published if they are relevant to this story in that they have some kind of tip or a well wish for the victim.

Such a sad story! I tried donating but did not see a PayPal option...I only saw credit cards. Do you know if I missed it?

Well, you're right. I just don't see a PayPal option. So you can either go with the credit card, or visit a SunTrust bank branch and make a cash donation to the JOSH BUTLER medical fund - or

You can buy this board for a skateboarder you know and the proceeds go to Josh:

Here's another article on Josh:

Whatever you do - don't read the one in the AJC. It distorts the story - making it look like a drug deal gone bad. Even refers to the perps as "young passersby"... VERY disappointing. The AJC is truly in the business of hiding just how dangerous downtown ATL is. I canceled my subscription.

That's all I'll say on that.

At least this AJC reporter interviewed some of the victims.

Atlanta is just starting up a program that offers free housing to police -- in areas that suffer high crime rates. Do we - or could we do this is DeKalb?

I would love to see officer's located / living as close to our schools as possible!

I'm sure we could learn something in DeKalb via the Atlanta Police Foundation. Don't people want to learn in DeKalb?

This is a great program!

Cere--
I certainly won't defend the poor reporting of the AJC or any of the Cox empire (wasn't it WSB that facilitated the whole superintendent search leaks fiasco) but "just how dangerous downtown ATL is"? I think it's possible to go to a Braves game or the Aquarium without being assured of being attacked by a gang.
As in just about any major city, one needs to exercise caution and awareness, but this really reminds me of the comments on this board during the redistricting fight when some folks sounded like they were deathly afraid of having to stop for gas anywhere between Dunwoody and the airport. What happened to this kid is awful, but most residents don't get mugged on a daily basis downtown.

Right. They say it's improving. But it's still not the safest of cities. Just don't be lulled into a false sense of safety. It's one thing to go to a Braves game - quite another to actually live, work or attend school downtown.

But current police statistics show a worrisome trend for 2011 with a seven percent bump in robberies and a 14 percent spike auto thefts, according to APD numbers. Those two categories are still down, though, when compared to 2009.

"Robberies are a real concern because they will impact businesses and tourism," said Robert Friedmann, a Georgia State University criminologist who reviews APD crime numbers weekly.

Atlanta Police Chief George Turner said he believed that the robberies were driven by the poor economy. He said that the reports showed that most were street robberies in which small items were taken, and he said zone commanders were trying to address them by concentrating forces in hard-hit areas. He said they had set up a regional task force with 15 other agencies to tackle car thefts, which he said saw criminals stripping the vehicles for parts, shipping high-end ones overseas and even smashing older models into bales of metal.

"We know we're losing cars to these crusher yards," he said. ...

Crime has made headlines especially in downtown Atlanta in recent years despite the decreasing numbers citywide in a large part because many of the victims were students from Georgia State, Georgia Tech universities and the Atlanta University Center. But while there was a big bump in auto thefts in the downtown police zone --14 percent so far this year -- the other violent and property crime number way down from 2009.

Kathy Boehmer, who lives near Georgia Tech, said crime has definitely fallen in her Home Park neighborhood, which was once hard-hit with car jacking, home-invasion robberies and scores of larcenies, for the last couple of years. She credits the Atlanta Police with putting in more foot patrols and the partnership it formed with not only Georgia Tech police but also the security force for Atlantic Station.

Atlanta’s crime risk is nearly five times the national average -- higher even than Detroit's, according to an analysis of FBI crime data by Onboard Informatics and reported in U.S. News and World Report.