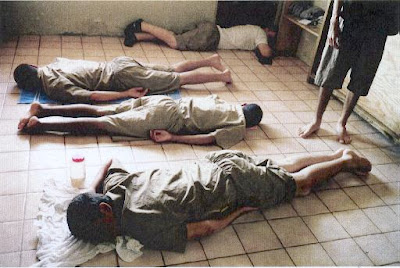 There is a silver lining to this bleak economy: Abusive and ineffective "tough love" programs for teens are failing right and left.

In just the last few weeks, the notorious Tranquility Bay program in Jamaica, Spring Creek Lodge in Montana, and Pathway Family Center in Detroit and Ohio have all been shuttered.

Tranquility Bay was known for making kids kneel on concrete for days and using "restraint" so harsh that it broke bones. Both Tranquility Bay and Spring Creek Lodge were part of a network called the World Wide Association of Specialty Programs and Schools (WWASP or WWASPS)--and the group's philosophy involves constant use of emotional attacks and humiliation in a rigid, structured day in order to break teens' spirits.

Spring Creek was notorious for a frigid, small isolation room called "the Hobbit"--sometimes teens were left there for months.

From Pathway--which was descended from the infamously abusive Straight Inc.--I received two separate accounts of suicide attempts by girls which were not reported to their parents, and many stories of the usual attack therapy and humiliation. Unfortunately, neither WWASP nor Pathway is completely dead yet: WWASP still has centers operating in the US and abroad, and Pathway has sites in Indiana: Porter and Indianapolis.

The media tends to present these closures as sad examples of needed services being cut--but in fact, teens are better off with no treatment than with treatment that often divides families and has characteristics known to produce post-traumatic stress disorder (PTSD). Family support tends to be crucial to long term recovery--and PTSD doubles the odds that a drug problem will become a lasting addiction.

Troubled teen programs were yet another sign of the bubble economy. Many were financed by mortgage and home equity loans because they cost thousands of dollars a month and because insurers, quite correctly, don't usually pay for programs that aren't proven to help.

Since there are proven alternatives for teens with drug and other problems that do not carry the risks of "tough love," we should greet the closings of these centers with glee.

And those who care about this issue should keep the pressure on so that the wounded programs finally die. After all, there are still teens suffering inside, being "treated" without dignity or respect--some of whom were just transferred from closed programs to other similar, sites.

Legislation to ban the most egregious practices is coming--and may well be strengthened now that the Democrats control Congress and the White House. But an even better outcome would be for the "troubled teen" industry to wither and be replaced by what the evidence shows works: community-based, family-centered, minimally restrictive, and youth-driven care.

One of the main reasons I re-posted this article here is to spread the word about these types of abusive programs and to let you know the connection to the Semblers. Mel Sembler is a co-founder of a program created in the 70's called "Straight". Now, his wife and Straight co-founder, Betty Sembler has been named by Governor Charlie Crist to Florida's "Women's Hall of Fame" for her work fighting drugs. Last year the DEA gave her a lifetime achievement award. This same writer, Maia Szalavitz uses this analogy for Betty's recognition, "Imagine if Wall Street were to honor Bernie Madoff for his skills as an investor ten years from now."

In another post in Huffington, Maia states that, "Straight--which at its peak had centers in seven states and claims to have treated 50,000 teens--has long been discredited for not only being ineffective, but harmful. Its policy of using confrontation, humiliation and physical punishment led to dozens of lawsuits, with plaintiffs winning hundreds of thousands of dollars for kidnapping, unlawful imprisonment and emotional abuse."

Sadly, although Straight has fizzled, there are many programs today utilizing the same, abusive and counterproductive "treatments" designed by Straight. Programs that also offer "seminars" which serve to brainwash parents to "Stay with the Program" until it's completion, while of course, incurring tens of thousands of dollars of debt.

Decent programs for at-risk teens do exist, however Straights, Pathways and WWASP are not among them. These programs are run by untrained people for one reason only -- money.

Don't be fooled.
Posted by Cerebration at 7:54 PM

Our silver lining in the dark cloud of these economic times.

Please get your facts straight. Tranquility Bay did not have kids kneel on concrete and did not cause any bones to be broken.

As you can see, this is a very contentious subject. Maia has been researching the "troubled teen" industry and reporting on it for a long time, so I'll assume that she has done the research to back her statements. If you Google Jay Kay, the director of T Bay (an son of the owner of WWASPs schools, Ken Kay), you will find that he admits having sprayed children with pepper spray as discipline in the past. Of course, according to "The Guardian", he isn't trained in education or anything to do with children.

"Jay Kay is 33 years old, and the son of Wwasp's chief director. He opened the facility at the age of 27, after four years as administrator of a Wwasp-run juvenile psychiatric hospital in Utah. Previously he had been a night guard there, and before that a petrol-pump attendant, having dropped out of college. He has no qualifications in child development, but considers this unimportant."

http://www.guardian.co.uk/education/2003/jun/29/schools.uk1At any rate, you can check out some of these videos and reports if you'd like to know more about the reported treatments at Tranquility Bay and other "behavior modification" places.

http://www.liveleak.com/view?i=10d_1200886926 http://www.isaccorp.org/http://www.helpyourteens.com/news/extra_january_2003_newsletter.htmlhttp://tranquilitybayabuse.blogspot.com/http://www.wwaspsinfo.net/tranquilitybay.htmlHeck - just Google the place yourself -- it's all over the internet. Reports of abuse have been aired by the BBC,

I understand that there are parents out there who will swear that schools like these have done wonders for their children. There are also parents who remain in deep denial as to what actually goes on in these schools - I admit it would be very devastating to realize that you sent your child to a place like this. Desperate parents do desperate things - I'm just trying to ensure that these decisions aren't made because a desperate parent was "sold" into a program that could harm their child. If some of the details and "facts" are not straight, I apologize, however, I think the evidence overwhelmingly points to serious concerns about these kinds of programs. I, for one, am happy that the economy is taking a toll on their profits.

I'm of the mind that we're better off seeing some of these place disappear, too.

However, the ugly thing is that the bad economy is also putting the screws to WONDERFUL programs that aren't based on crazed short-term behavior modification techniques, etc.

Too bad that the same economic hammer that's crushing the bad guys is beating up on the good guys, too.