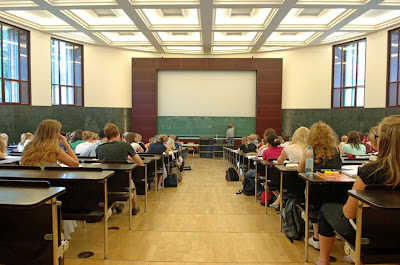 One of our regular bloggers gave us the heads up that the latest CIP report has finally been posted at the DCSS website. Right out of the starting gate, I have to wonder where on earth the cover photo was taken - does anyone recognize that school? I will say, however, that the other page layouts are very well done, organized and informative. And the pictures are of the actual schools.
(UPDATE: this is definitely a stock photo. Here is the link to the stock house version. This is a photo of a classroom in a German university. We do not have a building that looks like this in any way, shape or form.)

This month’s featured project is the Lakeside High School Additions, Renovations and Modifications project. The Project includes the phased construction of Additions, Renovations and Modifications to Lakeside High School. The Project Scope of Work includes significant site modifications and improvements including, but not limited to, extension of entrance drive, faculty parking area modifications, student parking redevelopment, tennis courts, football field and running track, underground storm water detention, and site utilities. The Project Scope of Work includes three additions to the existing facility; a Fine Arts Addition, a two story Classroom Addition, and a Kitchen Addition. The Fine Arts Addition includes a 600 seat Auditorium and instructional space for Band, Orchestra, Choral, and two Art Rooms. The two story Classroom Addition provides space for 24 classrooms, which includes a Professional Foods Lab / Kitchen, 6 Science Labs, and an Engineering Technology Lab. The Project Scope of Work also includes renovations and modifications to the existing two story facility. Work in the existing facility includes major renovations to the existing Kitchen, Locker Rooms, Toilets, Administration, and Classrooms. The minor renovations include Media Center, Cafeteria, Corridors, and Classrooms. The designer, Manley Spangler Smith, has completed the 50% Construction Documents, and the 100% Construction Documents are projected for January 2010. Construction is expected to begin in the spring of 2010.

McNair HS - The scope of work for this project includes a new handicapped ramp at the performing arts building and improvements at the sports fields, including goalposts and new dugouts at the baseball field and regarding/re-sod the football field. The tennis courts will receive a new surface and new netting. New storage buildings for football and baseball will be constructed. Repaving, curb repair and new sidewalks, stairs, and ADA ramps will be installed.

Cross Keys HS - This project includes renovation and upgrades to HVAC, ceilings, lighting, and electrical systems. Also included is a 15,000 SF expansion to a classroom wing to accommodate the relocation of Dekalb High School of Technology North and re-roofing of the existing building.

Tucker HS - The new facility will be built in two phases around the existing school. Phase 1 includes a two story building fronting LaVista Road which will house academic classrooms and the 9th Grade Academy. Additionally, a four story general classroom wing with administrative offices and a media center and a three story parking deck will be constructed. Phase 2 consists of the Career Technology Labs, Auditorium, Fine Arts and Gymnasium facilities. Site work for the new fields will also be completed in this phase.

Woodward ES - The scope consists of HVAC, ceiling and lighting replacement. The multipurpose/gym building is not included in this scope (other than new fire alarm system) because it is a relatively new addition to the facility.

Stone Mt. HS - The scope includes the replacement of the HVAC system, interior lighting system, fire alarm system, and ceilings. The roof will also be replaced and a new emergency generator will be installed.

Cedar Grove HS - The scope of this contract consists of HVAC, ceiling and lighting replacement, as well as roof replacement and addition of an emergency generator at this 177,700 sf facility.

Sam Moss Center - This scope consists of replacement of the HVAC system, ceilings, and lighting, as well as relocation of partitions. Additional work at the Sam Moss Center includes painting interior walls, ceilings and install flooring in the office and administrative areas of the building.

Clarkston HS - A building addition of 32,000 SF that includes Career Technology space and a new auditorium. Also included is replacement of HVAC, ceiling and lighting systems in the existing building as well as other facility improvements.

At its May 2009 meeting, the Board of Education approved the Mid Program Assessment Report which included authorization to add the first five (5) prioritized projects to the current CIP. This approval included adding $47,469,963 to the CIP for Southwest DeKalb High School, Lakeside High School, Cross Keys High School, Technology and Roofing. The approval of the budget allocation to the proper cost codes was approved at the July 2009 Board meeting, therefore, the total of the cumulative budget is $513,469,963.

He Druid Hills addition is still unable to be occupied, due to its failing the Fire Marshall's inspection again.

It made me smile to see that the plan includes upgrades to ceilings, since the roof still leaks (repairs wer supposedly completed this past summer), and the ceiling tiles are getting wet as frequently as it rains. Does this mean that the ceiling upgrade is an ongoing [neverending] project??

Where in the world did they get this photo? Not from any DCSS high schools that I have been in.

One of the most interesting facts I found in scanning this doc is the SPLOST III revenues reported. Through October 2009, we are still 17% ahead of projections with an "additional" $30m so far.

It is worth noting that the rate at which collections are exceeding projections is clearly slowing down - we may not continue to exceed. But this blog needs to watch over that revenue stream and not let it go unmonitored by the public.

I have asked a lot of savvy people in and out of DCSS how "excess" SPLOST money is allocated but have yet to get a clear picture ... scary.

I have to also add how discouraging it is to see how relatively little is finding its way to Cross Keys - we have chewed this over and over on the blog so I apologize but ... I can't help but notice once again that so little "new" is in budget for CKHS beyond the move of Tech North. Beyond that, it's pretty much HVAC, wiring, paint, and lighting on paper.

I hope wider advocacy will make a difference for the Buford Hwy attendance zone the next time money is on the table for high schools.

"Where did they get this photo?"

Of course, it couldn't have been anywhere in DeKalb. Note the ethnicity of the students and especially, how they are dressed: no baggy pants or hip-hop/thug outfits.

BTW - it's a stock photo. I knew we didn't have a classroom that looked that funky and cool - or one that was totally full of white kids. (This one happens to be a shot of a lecture at a German University - thus all the fair skin.)

ps - I hate to tell you this Kim, but I have come to believe that all the extra SPLOST money is being funneled into a special fund earmarked, "The Crawford Lewis School for the Performing Arts"... the most recent estimate for this dream project was approaching $100 million. Betcha they're getting close to having that on hand.

Thanks for letting me know about the latest CIP report. I have been searching all the time about it .I am happy that fire alarm systems is included in Stone Mt. HS.

DHHS addition has finally been cleared for occupancy. Hooray! Having to move classrooms during the break is a bummer, but moving during the time school is in session would have been tough, too. Never a good time.

Update on ceiling leaks. The official word is the leaks are not from the roof, but rather from the HVAC system, which is supposed to be repaired. Not sure when in the schedule this is, because the work on the rooms is being done one floor at a time, with the classes on the affected floor moving somewhere else for the duration. Wouldn't make sense for repairs to be done only to have the floor/ceiling torn apart again when it's time for those rooms to be worked on.

I am happy that some or all of the broken windows will be replaced. They bother me from a leakage and bodily harm perspective, and they've been broken for quite a while.

Latest CIP report impress me so much. I appreciate your effort.