From "The Journal", Campus Technology Division
A sponsor's case story (aka: to dream a dream for DeKalb!) 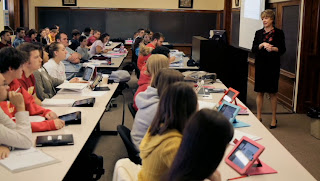 As one of the first schools in New England to pilot the Apple iPad across multiple grade levels, Millis Public Schools in Massachusetts is a technology pioneer. To connect the iPads and other wireless devices to each other, to teachers, and to the Internet, the small, 1,500-student school, with students in pre-K through grade 12, rolled out a new 802.11n wireless network two years ago.

The wireless network and the iPads are part of the school’s Personalized Learning Initiative, which includes a 1-1 learning blueprint. The school defines 1-1 learning as “the tailoring of teaching and learning to the needs of the individual student.” That includes a personal computing device for each participating student—devices that can be tailored to individual student needs.

In February, Millis distributed 110 iPads to its eighth graders as part of a pilot to use at school on the wireless network and at home. The objective, as the Millis Public Schools’ web site explains, is to determine how the mobile, networked devices can help students improve productivity, engagement, and learning. The pilot has already been a success, so much so that in the fall, the plan is to move those students to iPad 2s as they enter the ninth grade, and to distribute the current iPads, which are version 1, to new eighth graders.

According to Grace Magley, director of technology for Millis Public Schools, the school has long been Apple-focused, with a wireless system in place for years that used Apple Airport base stations to connect teachers’ MacBooks, along with laptops on carts for student use. But with the gradual move to 1-1 learning, Magley says, “we knew that what we had in place [for a wireless network] wouldn’t support a device per student.”

The search began for a more robust system; the school considered several vendors, but settled on wireless vendor Xirrus for several reasons. Magley and her staff liked the Xirrus overall management system, but the trump card was the system of Arrays that Xirrus employs. Rather than access points, a Xirrus wireless network receives and transmits signals using devices it calls Arrays, which contain two, four, eight or 16 radios per device. Each radio can be programmed independently for signal strength, the antennas’ directional signal, and to avoid channel conflict. Fewer devices mean fewer headaches around installation, wiring and support, as well as fewer ports in connecting the wireless devices back to the network.

While each array is more costly than an access point, it is also much more powerful. With 13 Arrays in place throughout the school, Magley estimates that she needed just half to a third as many Arrays compared to access points. All eight of the school’s eighth-grade classrooms, for example, are supported by a single array. In one location in the school, an array supports 120 devices. “We would have needed an access point in every classroom to support that saturation,” Magley says.

The Xirrus network supports the school’s iPads, along with four mobile wireless labs, and teachers’ laptops computers, along with a large population of students at Millis who are taking online classes at a collaborative virtual high school.

The current pilot has “been really successful in terms of what students are able to do with the iPad,” Magley says. The devices are being used with Moodle, the school’s learning management system, for example, and by every eighth-grade teacher across every subject, from art to music to TV production.

One example of a useful application that Magley cites is eClicker Host, an app that requires a small fee for use on teacher devices but is free for student devices. Using the wireless network, eClicker turns each student’s iPad into a personal response system, which teachers can then use to pose quick questions to students during class to assess understanding and direct discussions. Students and teachers can see a real-time graphic display summarizing everyone’s response, giving a sense of learning in the classroom as a whole and individually.

At Millis, iPads and a robust wireless network are giving teachers and students more control over learning styles and environments. Says Magley: “This project has really made an impact.”

Email ThisBlogThis!Share to TwitterShare to FacebookShare to Pinterest
Labels: technology in the classroom

DCSS MIS is a Microsoft shop and will remain so. They have long discouraged the use of Apples by refusing to let schools connect to the DCSS network, etc. Ask any school who has gotten money from a grant, PTA, etc. that wanted to go with Apples.

This is putting the cart before the horse. We have much to clean up before we even dream of something like this.

My dream, is that we have a lean school system where money is spent on the children, so that they receive quality education. Our schools would all be in working order free of the many outrageous defects that children and teachers deal with now. Principals and all administrators would be in their positions because of what they know and not who they know. Students would be held to the highest of standards at every school and that we'd have alternative paths of learning (trade schools and such) for children not wanting to go to college.

Let's get these ASAP. It will be something to be stolen and sold. DCSS is obligated to help the local economy.

I think that it is a great idea. I was watching a special on t.v. about children with special needs. It showed teachers attempting to teach special needs students using paper, books, pictures, movement Then it showed teachers teaching using the Ipad. For some reason, the students seemed to respond to the Ipads. The students went from looking at the teachers like they were crazy to the students actually observing and learning from computer.
It showed a child with Autism whose mother constantly struggled trying to understand what her child wanted and need because he could not speak. They gave him an Ipad with a program and now the parent understands what the child wants and needs.

I say this to say I think that this could be a great Pilot Program for DCSS especially in areas with diverse populations. With proper training and how to use the IPad as a tool for instruction, there can be much too learn, for both students and teachers.
I have heard that that the photo/camera feature on them have been disabled to protect students at least until they can figure out to use it without students abusing it.
The only downfall is that MAC requires that a of the Apps be purchased.