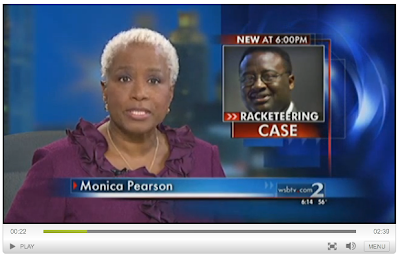 UPDATE: We apparently jumped the gun on this - no decision has been made yet. Seems this was actually old news. The crew at Channel 2 was doing some website updating and this story got moved - making it look like it was new, but it's from November, 2010. Sadly, the appeals court has not yet reached a decision on Lewis' claim.

WSB Channel 2 is reporting that Dr. Lewis won his appeal to keep his Alston & Bird attorney. The court apparently agreed with his claim that the previous decision was drastic and unfair, leaving him broke and needing to start over with his defense and agreed to hear his case.

Lewis is apparently out of funds, having spent the $100,000 the school board allocated for his defense against racketeering charges stemming from a criminal enterprise he allegedly ran inside the school administration that focused on abuse and misappropriation of SPLOST construction funds as well as state funds that he misused for personal expenses and travel.

"Dr. Lewis has spent nearly all of his available funds to prepare his defense. Now, just three months before the trial, the trial court has disqualified his counsel leaving him with little time and resources to defend himself against serious charges that could send him to prison"

Ironically, they interviewed Manny Arora, Pat (Pope) Reid's former attorney who agreed that it would be a hardship for Lewis to start over. Reid is also charged with SPLOST misappropriation and racketeering. Her former husband, SPLOST architect Vincent Pope and her secretary Cointa Moody are charged as well and face trials of their own.

However, the first court still insists that the conflict of interest is clear.

When the appeals court actually does render a decision, a trial can begin.  Let's hope things can get moving. The public has waited long enough, and wasted far too much money on these trials, literally using money earmarked for student's educations to pay attorneys for construction lawsuits and alleged criminal activity instead. In fact, in the civil case with Heery-Mitchell, initiated by Dr. Lewis himself, the school system has spent well over $15.5 million to fund a countersuit against Heery. Something like 14 school system employees, board members or former board members have been named in this suit and the board has voted to pay for each of their defenses as well.  This must get resolved.  There are many school systems across this country that could effectively run their entire system on what we spend on legal fees.
Posted by Cerebration at 2:12 PM

Clew is supposed to be broke. Our generous BOC Chairman Bold Tom Bowen will come up with some way to give CLew another few hundred thousand dollars. Maybe a consulting contract for monitoring and overseeing the transition that Ms Tyson is getting paid to help with.

Maybe we can chip in and buy CLew a new siphon hose for his gas tank.

Good! I hope this speeds things up! It's time to get the last chapter written regarding the worst administration DCSS has ever seen!

Cere you gave me a jolt when I saw the title, Clew WINS Court Victory!
whew...

I agree - let's get this trial going and over with. I fear it is going to be painful for the school system.

I think it will show the gaping holes in oversight of the half-billion collected each and every SPLOST. Unless and until they can get tighter oversight and an educationally sound plan, I would hope that citizens would not grant them another dime. They need to get to work and formulate a plan, a system of checks and balances and a separate accounting department (Turk has enough to do with the regular budget) - then, next year, pose a respectable plan and ask the voters for their support. This is not a now or never vote. They have work to do in my opinion.

Cere, the best time to plant a tree is? Why should my children have to wait another year for someone to update their school house? If there are things to be correct let's correct them NOW. Why don't we just make sure that we oversee the new SPLOST NOW. Why do we always have to wait to get better? I want to improve the school system so we can stop sacrificing our children's future. Very respectfully, I don't think that postponing what needs to be done helps our students in any way.

I stated last November (2010) that Lewis/Reid would never be convicted in Dekalb County. I Stand by that.

The only way to get true improvement in this system is to stop the money flow -- even if temporarily. The failure of SPLOST will send a loud and clear signal for far more than just our Board of Education, it will hit the legislative delegation very hard.

We all thought Pat Pope was great when she started and look how wrong we were.

We are not ready to receive 500 million more dollars to spend.